Meya supports two typical development scenarios. The first relies on Meya's internal system to manage code, and the second which can be connected to external source control

We refer to this as a "low code" workflow, as it's most appropriate when you are developing your code within the web console, or possibly from the CLI.

Re-connect to your development app!

If you deploy code to production using meya connect, don't forget to re-connect to your development app afterward. Otherwise, you could make unintended changes to your production app!

The main difference between this and scenario 2 is the lack of external source control.

The "deep-code" approach is more advanced and is appropriate for teams of developers who want to apply good software-development practices to their app development using their preferred version control system.

In this section, you'll learn how you can use Github Actions to automatically test, build, and deploy your code.

Note that you are not restricted to using Github for your remote repos and CI/CD process. All examples on this site, though, do use Github.

In your Github repo, navigate to the Settings tab. Choose Secrets from the left-hand menu, then click Add repository secret. 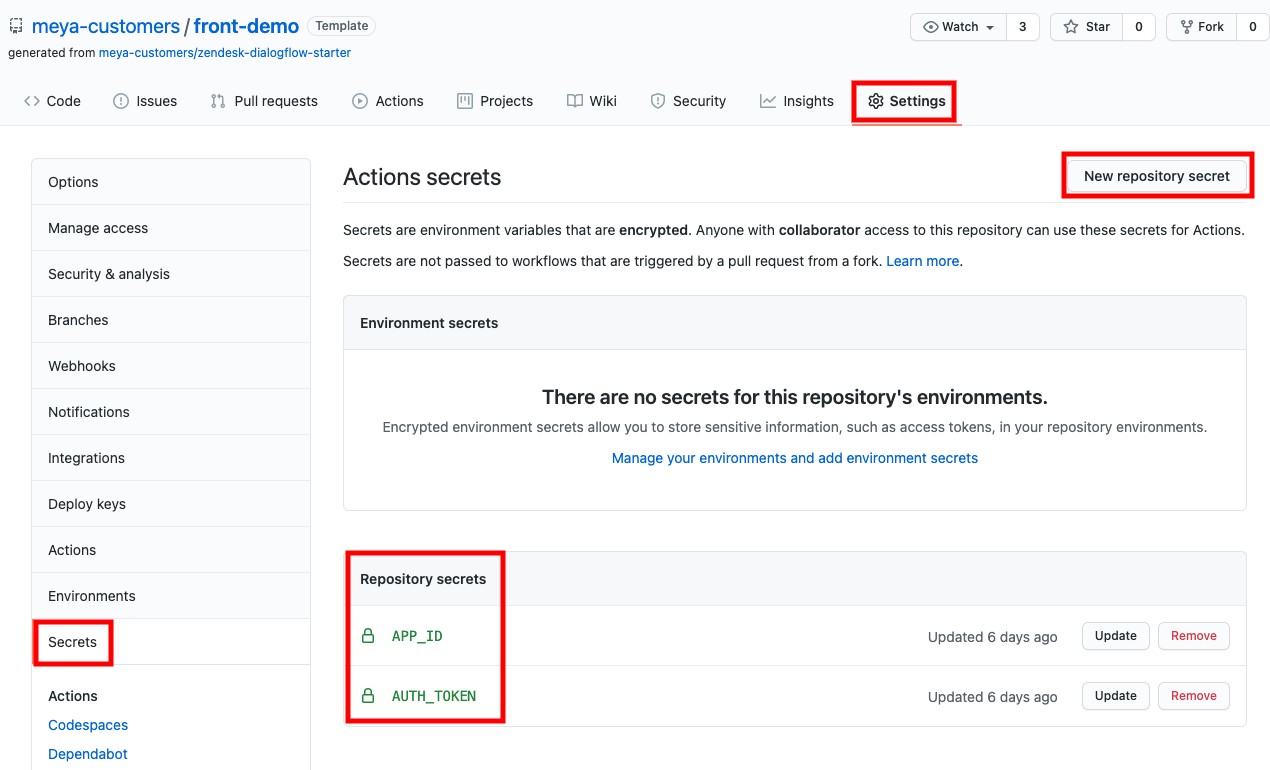 Note that your token needs to have permission to modify the production app and vault. To check this:

In your Github repo, select the Actions tab, then click the set up a workflow yourself link.

Give the workflow a name, then replace the existing code with this code:

Line 8: This workflow will run when code is pushed to any branch.

Lines 12-26: Some initial setup is done, including installing Python 3.8 and the required dependencies using pip.

Lines 27-32: The workflow uses your auth token and app ID to authenticate with Meya and connect to your production app.

Lines 33-36: Checks and tests are run to verify that the code is properly formatted and works.

It's always a good idea to run meya format, meya check, and meya test before committing code, but in case you or your teammates forget, this will make sure errors are highlighted in Github.

Lines 37-39: The workflow will now push the code to your production app only if code was pushed to the main branch.

main is the preferred term for your main production branch. It was formerly called the master branch. If you still use the term master, be sure to update line 38 to refs/heads/master.

Updated about 1 year ago